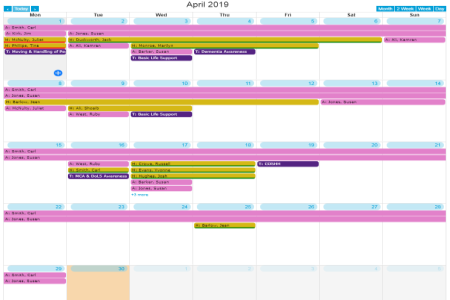 Less than a year after its official launch in June 2018, care home software provider CoolCare has updated its CoolCare4 product with a major release. The CoolCare 4.2 release includes a redesigned staff calendar and the ability to export custom made reports into Excel, alongside a wide range of smaller improvements across the system.

“Using the latest software development techniques means we are now able to make improvements and release them to our customers on a regular basis.  Since our launch, we’ve made a series of smaller update releases but 4.2 is our biggest to date.  It follows initial positive user feedback about our staff calendar and how it was helping them drive improvements in their home.  We’ve therefore given it an even stronger focus on managing training compliance in an even more intuitive way.

Direct access to data has also been a frequent request from customers. CoolCare has a suite of reports already so by making CoolCare4’s custom-built reports exportable to Excel as well as PDF, CoolCare customers will be able to tap further into that wealth of data they have acquired. It gives care providers the flexibility to be able to sort and analyse the data available exactly as their business requires.”

CoolCare has as full roadmap of planned development which is automatically provided to CoolCare4 customers through the regular, often fortnightly, updates.   The roadmap remains under constant review, listening to the needs of the sector and ensuring the highest priority features are developed first.  Taking this approach gives CoolCare great flexibility in adjusting its plans in the face of the ever-changing realities of the social care sector.

The next major release, 4.3 will be announced in the coming months and is expected to include updates to CoolCare4’s rostering system

Intastop Ltd has been leading the way in the specialist fields of anti-ligature products and door and wall protection for over 20 years. This pedigree, combined with the company’s commitment to new product development and leading edge innovation, ensures Intastop remains a leading manufacturer and supplier to the healthcare, public and leisure...