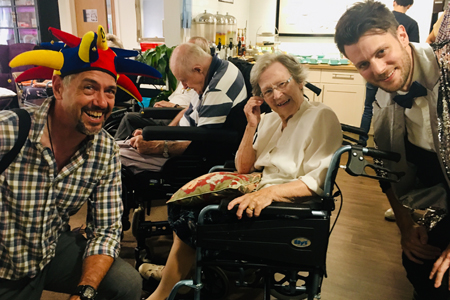 The event at Gracewell of Newbury, which took place on Wednesday 28 August, was organised by Sam Michael, marketing co-ordinator at carehome.co.uk, who also runs comedy events part time and featured in the line up.

His idea for the event was to "bring a bit of the Fringe to the care home" for residents who are no longer able to go and watch live comedy. Around half of the audience are living with dementia so the acts adapted their material accordingly, with some focusing on physical comedy and others deciding to sing, recite poems and perform magic tricks.

The gig had a strong line-up and was hosted by Alex Farrow, in a sparkling silver jacket, who has recently been performing his Philosophy A Level show to packed Fringe crowds. He has performed alongside some of the hottest names in comedy, including Nish Kumar, Rachel Paris and James Acaster. The line-up was completed by Ed Pownall (as heard on Radio 2 and Talk Radio), Toni Kent (as heard on BBC Radio Berkshire), Connor McReynolds (as heard on BBC Oxford radio), Ian Macdonald and Sam Michael.

The comedians involved enjoyed the challenge of performing to a different crowd. Toni Kent says: "One of the gentlemen had a filthy laugh, one produced a fantastic heckle and during my set there was a ‘stage invasion’ as one lady asked to be led out."

She adds: " ‘They were a tough crowd but they were a great crowd too. Best of all was the fact that everyone involved was completely up for taking their set to an audience that might not strike you as classic comedy club but are no less entitled to have access to comedy."

Alex Farrow says: ‘Was it a tough gig? It’s not like my others, but I thought it would be a lovely thing to do. My favourite jokes were always my grandmother’s jokes. I remember thinking I wonder if I can channel some of my grandmother’s sense of humour here."

Ian Macdonald received the best heckle of the event at the end of his set, when resident Dennis Amor, aged 92, quipped "You haven’t done anything yet".

Ian Macdonald also runs laughter yoga and ‘happiness’ classes and found himself using these techniques in the show.

While some with dementia may have struggled to follow the logic of a conventional joke, they could respond to the more physical comedy. Adults typically laugh just 17 times a day compared to children’s 300, research has shown and a good hearty laugh helps alleviate depression.

Instead of using traditional yoga exercises, laughter yoga sessions include clapping and a series of laughter exercises.

Mr Macdonald got the audience going by making residents copy his silly little giggles and big fat belly laughs. Clutching his stomach and rocking back and forward as he let out a roar of laughter, he soon got the crowd engaged in giggles.

His buffoon-like, physical tomfoolery won the audience over and even brought forth a heckler.

He says: "We came into their home and the goal was to make them laugh. That was my biggest goal and I think we did that."

The event was popular among the Gracewell of Newbury community. Resident Barbara Harris says: ‘The comedy was so enjoyable and made the afternoon fly by." it reminded her of when she and her husband used to go and watch comedians like Ken Dodd and Morecambe and Wise at the London Palladium.

Heckler Dennis Amor, aged 92, says of the comedians: "They’re not bad at all. They can come back. There should be more comedy shows. Anything what makes you laugh!"

Sam Michael, marketing co-ordinator at carehome.co.uk, organiser and comedian, says: "It was a fantastic afternoon with plenty of laughter. The event was nothing like a normal comedy gig, but the audience was absolutely lovely.

"There is no age limit for comedy and we know laughter is good for you physically and mentally. It was really interesting to see the comedians adapt their performances for the Gracewell of Newbury community and really pleasing to see residents laughing and even dishing out some heckles!"

Scott Lindfield, care home manager for Gracewell of Newbury, says: "I thought the comedy afternoon was a great event for the residents of Gracewell of Newbury! It offered something different and it was wonderful that people were willing to give up their free time to come and perform. Speaking with the residents after the event they told me they had a really good time." FREE care software from Log my Care is ideal for any Care Provider.

Log my Care is an award-winning free care software provider. Their system has been designed by carers for carers, and comprises of a management portal called the 'Care Office' and an incredibly simple mobile application for frontline care staff called the 'Carer App'....