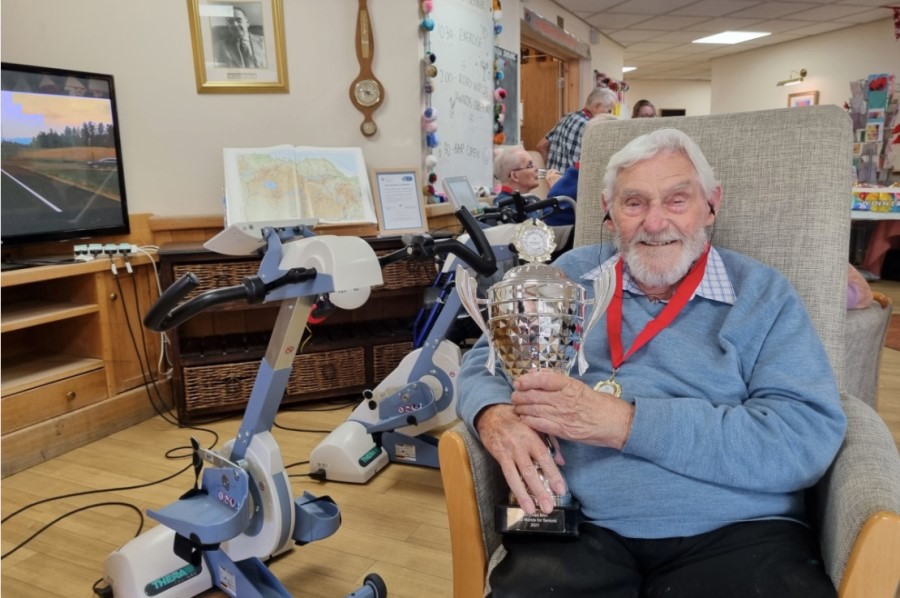 Motitech, the Norwegian startup behind the annual Road Worlds for Seniors global virtual cycling event, has announced a 99 year-old Warwickshire care home resident has won the title of UK male champion for 2021.

Ken Judd (pictured) of Galanos House in Southam, Warwickshire cycled a distance of 2,348 miles – the second longest in the world.

More than 5000 older people from 11 countries and 260 care facilities took part in this year’s competition, making it the largest to date, covering an impressive distance of 96,934 miles collectively throughout the month of September.

Motitech’s Road Worlds for Seniors competition encourages elderly people and people with dementia to engage in competitive exercise from the comfort of their homes, reminding the world that anyone can be an athlete - regardless of age - while promoting the benefits of physical exercise for ageing people.

During the championship, residents used Motitech’s video concept, Motiview, to cycle through a choice of over 2,000 locations from around the world using specially adapted bikes, via a video projection that plays whilst they pedal (with hands or feet, depending on mobility).

Award ceremonies have taken place across the UK, with all participants receiving medals for their achievements. Prizes will also be awarded to the male and female global champions who, throughout the competition, cycled the longest distance.

The team that cycled the longest distance is Bruyere Village in Ontario, Canada, whose 28 residents collectively cycled an 8,868 miles between them, securing themselves the title of 'World Champions Team’.

“The Road Worlds for Seniors is now in its fifth year; with every event growing in size and significance, welcoming more competitors than ever from around the world to take part. I am continuously blown away by the work, commitment, and enthusiasm shown not only by the cyclists - some of whom are over 100 years old - but by the amazing volunteers and practitioners supporting those taking part,” said Road Worlds for Seniors president Jan Inge Ebbesvik.

“We are proud to say that the 2021 competition has been the biggest and most successful to date, seeing records broken and participants from around the world cycling together. It really is a joy to see the event inspire, motivate, and enthuse so many people and really I cannot wait to hand out more medals than ever,” he added.

We have over 30 years experience and have a dedicated team of staff that deal with all of your pre-sales and after-sales requirements.
Installation is quick and mess free reducing the...