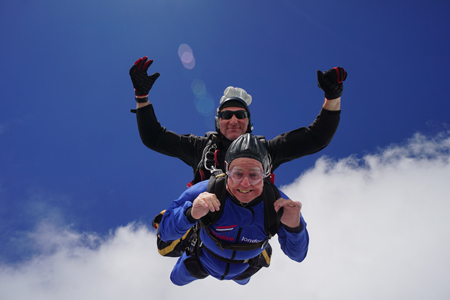 When MHA Fitzwarren Court resident Bernard Berry settled in to life at the retirement living scheme, he didn’t expect that he would end up skydiving to raise funds for their amenity fund at the age of 83.

Berry was one of the first residents at MHA Fitzwarren Court in Swindon when it opened four years ago and is a part of the resident's group. Part of the group’s role is to raise funds for the scheme’s amenity fund, which helps provide extras for residents to enjoy. In recent years this has included creating a rose garden in the landscaped gardens and buying a piece of equipment to help transfer people from their wheelchair into chairs.

However, funds were running low so Berry asked friends for ideas on how to raise money – and that’s where his skydive came in. He says: “What gave me the idea for the skydive was that it would be a little bit different and would grab people.

“The skydive was a wonderful experience and I got a big thrill out of doing it. It was an exhilarating experience and every moment was enjoyable. You are in the air then floating down through the clouds after you’ve stopped spinning around. I was concentrating on picking out all the landmarks when we cleared the clouds.

“There was a moment when I thought ‘what have I done’ but that soon went over.

“I would say to anyone thinking of doing it, have a go. There is nothing I have done which has come close to it. It is well worth doing.”

So far Berry has raised £800 towards his target of £1500 but anticipates reaching that as donations are still coming in.

Support for his skydive also came from his family including wife Jean, his two children, five grandchildren and two great-grandchildren, who are all very proud of his feat.

At MHA Fitzwarren Court, fellow residents will get a glimpse of what it was like for Berry when they gather to view the video taken of the event and hear about his experience.

Scheme manager Charlene Dean says: “We are all very proud of Bernard taking to the skies and jumping out of a plane to help raise funds four our residents’ amenity fund. It was an amazing thing for him to do.”

Finding the Right Solution for You
Based in the UK, we specialise in customer specific luminaries, refurbishments and re-testing of existing lighting. With over 50 years experience within the industry, we have extensive knowledge and a large range of extensive high-quality lighting for all budgets.
We are a solutions-based company and...