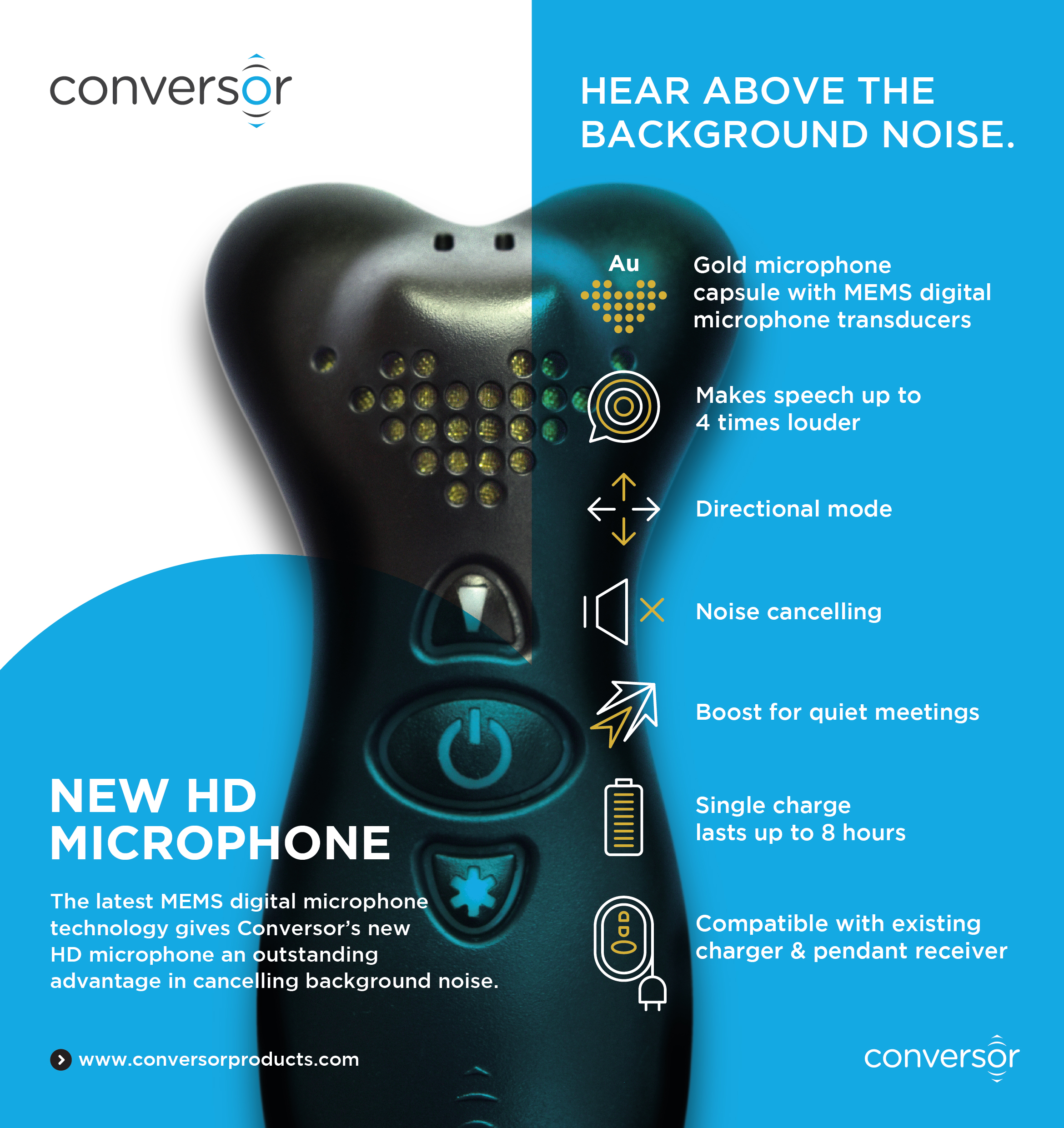 Conversor is a simple "Assistive Listening Device" It comprises a wireless handheld microphone and personal loop receiver. The simplest, most versatile and least expensive professional remote microphone for assistive listening.

The first Conversor was hand-made by an inventor called Andrew Hall, in Cheshire 1981.

He was frustrated that neither his nor his wife's deaf parents were able to hear their wedding speeches, so he invented a handheld directional microphone for hearing aid users. His invention made it to the BBC "Tomorrows World" program.

This was the first model available and was called the Conversor F1, made by Sense-Sonic.

Over the next few years, F2 was introduced, with rechargeable batteries, the company was sold and eventually in 2003 the F3 was developed by Glentronics, in Belfast, then eventually Conversor Limited was formed. Numerous new "channels" were added so the product could be adapted for use across Europe and in the US and Asia.

In 2005 manufacturing was moved to Sussex and some 10's of thousands of the popular F3 model were sold.

During these early years, several of the larger hearing aid manufacturers seemed reluctant to endorse a remote microphone. They asserted that the hearing aid was sufficient with its internal microphones. As the new millennium started so they all began to introduce their own remote microphones, each different and only compatible with their own brand. By the use of the loop system, Conversor remains uniquely compatible with all hearing aids. It is also the simplest to operate, and the least expensive.

In 2007 Conversor Pro was introduced, with a contemporary new look and modern lithium batteries.

Conversor pro continues to be a popular accessory, compatible with most hearing aids (if they have a "loop" receiver) and with optional headphones or earphones.

Since 2007 Soundfield speakers and telephone adapters have been added to the product range, and an entry-level device "Listener Pro" which provides the directional microphone without the radio. Multipack became quite popular, particularly for schools Churches and tourist attractions, due to its ability to include an unlimited number of “listeners”, using hearing aids or earphones.

Since 2007 Conversor Pro continued in popularity but it's analogue technology didn't develop very much. Meanwhile, hearing aids manufacturers have pretty well all moved to digital technology, which affords much more comprehensive audio correction and simpler programming from a laptop.

November 2019 sees the launch of the new digital microphone from Conversor.

"Conversor HD" uses modern digital microphone technology to reduce background noise in addition to providing the remote wireless microphone advantage. Once again the simple Conversor is able to assist speech intelligibility more simply than most other devices and can be used in conjunction with nearly all leading makes of hearing aid or with headphones or earphones.

At CareHomeLife we understand the challenges faced in running today’s care homes. Our intent is to positively influence the social care industry through the provision of high quality products, systems and solutions for the private care sector. That is why we have created a portfolio of product and service solutions to help a care home improve the...